Conquering a fear of flying – Part 2

Followers of our blog will remember the story of Laura, who contacted us to ask for help with her fear of flying. If you missed the article, it can be found here.

Laura had hoped to try flying with instructor Laurance a few days ago but the strong winds made it an unsuitable day for her first flight in a light aircraft, so instead Laurance and Laura spent time briefing about what to expect on her first flight with us. Laurance also explained all the different sights and sounds Laura had previously witnessed when flying on a large airliner – such as the wing flaps extending and the speed brakes operating. Laura explained that she had seen these surfaces moving during commercial flights but had no idea what they were or why they were moving, which quite understandably gave her cause for concern.

Although the weather forecast was for showers all day, Laura hoped that her first flight in a PA28 would go as planned today – a great sign for someone who has a phobia of flying! Instructor Laurance had already briefed that today's flight would simply be one circuit, no more than four or five minutes in the air. This way Laura knew exactly what to expect from today.

When Laura arrived the wind was all but calm and despite a rather dark cloud in the vicinity, the conditions were near-ideal for her first flight. Laura and Laurance got into the aircraft (our PA28, G-BMUZ) and Laurance started going through the initial checks, involving Laura as he did so. Laura was invited to start the engine herself and did so perfectly!

While making their way to the engine run-up area, Laura had another practice at taxiing both on the grass (for the first time) and along the taxiway too. By this time it had started to rain a little, so forward visibility wasn't ideal but Laura kept the aircraft nicely on the taxiway.

Once positioned for the engine run-up, instructor Laurance went through both the engine checks and the pre-departure checks with Laura – asking Laura to perform some of the actions herself where appropriate.

Throughout this time, Laurance had kept checking to see how Laura was feeling and before taxiing to the hold he calmly reminded Laura that she could change her mind right up until the point where he had to commit to taking off. Laura confirmed that although she was feeling nervous, she really wanted to go ahead and so they set off towards the holding point and called Air Traffic Control to say they were ready for departure.

As the take-off run began, Laurance explained everything that was happening and prepared Laura for the moment of rotation (the point where the aircraft leaves the ground). Laura was bravely dealing with her nerves and appreciated the calm voice next to her explaining the process of an aircraft climbing to circuit height. Laurance warned Laura before moving the flaps and explained that in a large aircraft she would also hear the noise of motors retracting the surfaces, although this doesn't happen on our PA28. He also prepared Laura for the pitch change as they levelled off and the fact that the engine note would change as he brought the power back. Before making the first turn onto the "crosswind" leg, Laurance told Laura to expect the aircraft to bank so that it didn't come as a shock. Very soon they turned onto the "downwind" leg, where Laura recognised the lakes to the north of the Aerodrome, near where she lives – but not quite close enough to see her house.

As Laurance performed the pre-landing checks, he explained to Laura what he was doing and prepared her for the pitch change and next change in engine sound as he lowered the flaps and began the descent after turning onto the "base" leg. Laura was quiet but confirmed she was okay and once on "final approach", Laurance explained how the red and white lights at the side of the runway help pilots to ensure they are at the correct height during the approach to land. With a light breeze straight down the runway, Laurance made a gentle landing and Laura was safely back on the ground again.

We were delighted to be able to award Laura a certificate to mark her first flight with us and in recognition of her achievement: 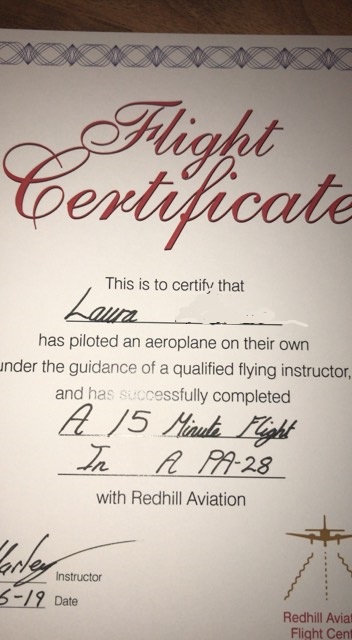 After the flight, Laura said: "It was scary but not terrifying. Laurance put me at ease with his confidence and lightheartedness. He also doesn't make me feel silly in any way. I was scared, but I was able to enjoy it a bit. I've decided that my first goal is to get through a whole circuit, however long, and not be nervous at all and maybe on the next flight I'll go a little longer".

Laura, we think you are doing brilliantly and we hope that your story will inspire others who may have a phobia of flying to face their fears too. We were especially delighted to see the big smile on your face after your flight! Well done! 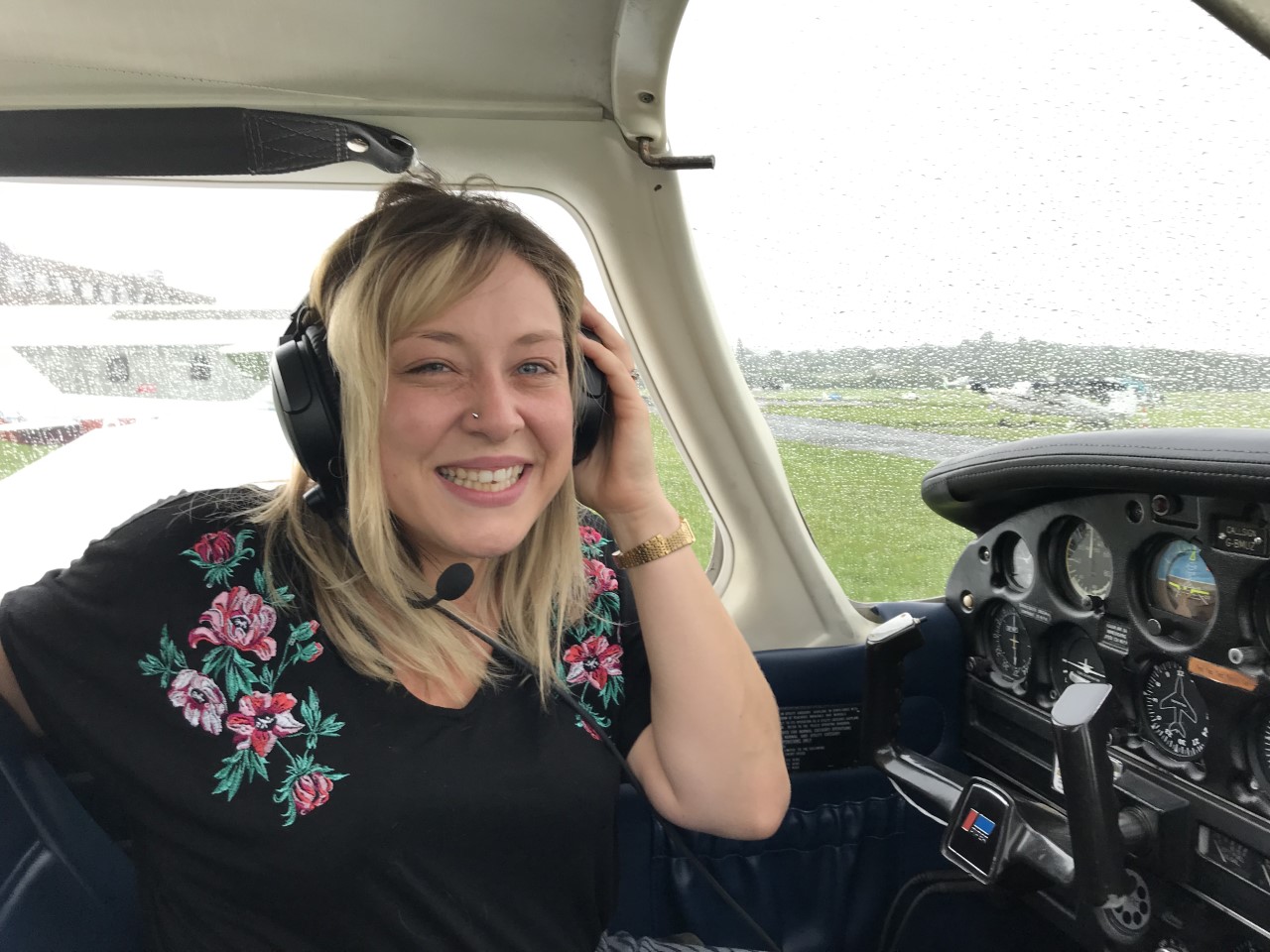 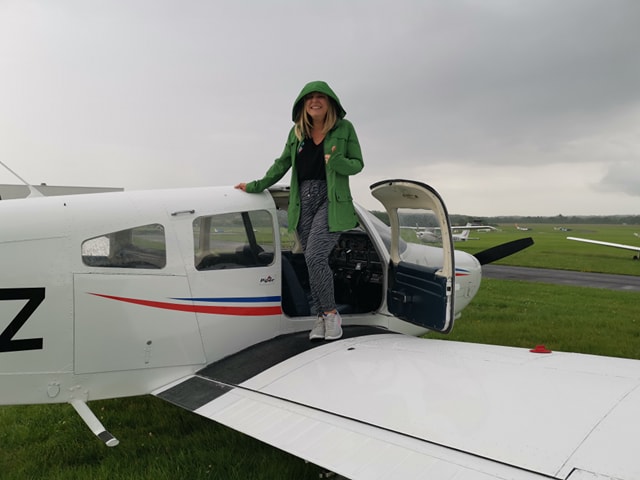