Our ever-helpful Operations Assistant, Toby, has been wondering for a while what all the fuss was about regarding our flying fun, so decided to find out for himself! In this article, he describes flying in a light aircraft for the first time, with plenty of aerobatics thrown in for good measure!

Over to you, Toby…

My flight on Friday with Simon Canacott was in G-BMUO and was the 60-minute Aerobatics Experience.

The conditions were bumpy, but that just added to the fun for me. Simon let me taxi the aircraft on the ground while making all the radio calls and then took back control for the take off, asking me to "follow him through" on the controls. We did a "performance take off" – holding the aircraft in ground effect, before pulling back on the yoke for a steep climb out.

After the aerobatic sequence was over I took control to fly the aircraft back to the aerodrome and put it onto the final approach and held it there. Simon only took back control at the last 50 feet when a gust of wind blew us off the centre line of the runway to put the aircraft down.

This is one of the best things I've experienced. Outside of the aerobatics Simon treated the rest of the flight as an actual lesson – teaching me the effects of controls, climbing and descending and medium turns. It most definitely beats bombing it around Thruxton Race course in a single seat racing car and I would recommend it to everyone.

Toby, your face says it all! NOW you know why we enjoy flying so much. 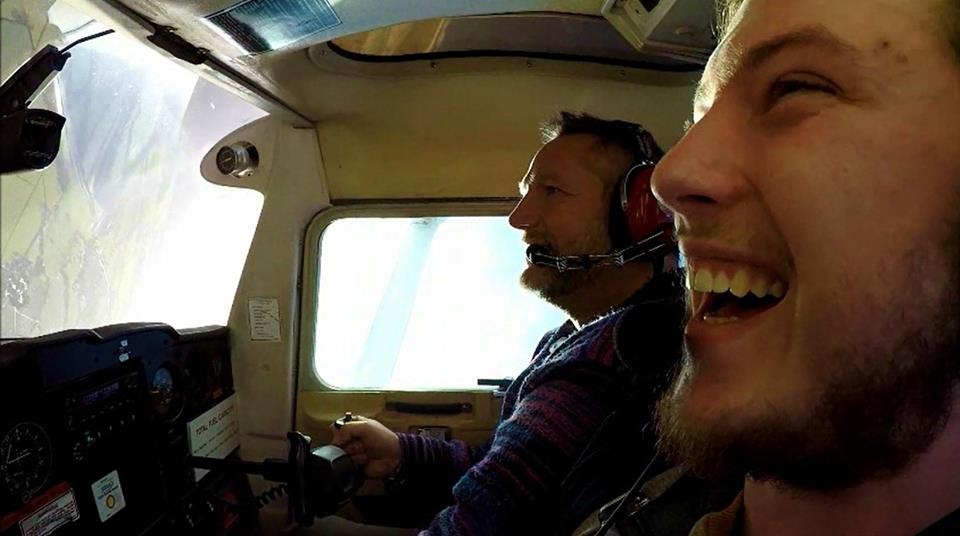